How to Silence your Inner Critic

Hands up if you’re taunted by an annoying, whining voice in your head telling you that whatever you’re writing is terrible, shit, awful or any other synonyms it might chuck at you.

And does this inner critic also have an infuriating habit of repeatedly asking why you’re still doing it? Do any of these lines sound familiar?

“Who are you kidding?”

There may be times when the inner voice is taking a power nap and you seize that moment by writing at high speed so they don’t notice that you’re doing the thing that you LOVE doing. But then the tap-tap-tap on your keyboard or the rustling of pages awakens them, so you give them attention because it’s rude not to listen. If this was a friend or family member telling you to get in the bin and stay there while they continue to pile the rubbish on top of you, would you just accept it and think: ah well, I’m in the bin now I might as well stay here? No. You would get furious and tell them to get in the bin themselves and see how they like it.

Sadly, I’ve not concocted a magic potion that will get rid of your inner critic once and for all, but I can give you some tips on how to deal with them. To begin with, there’s the good old acceptance spiel. Most of the time we’ll want to push them off a cliff, but sometimes they can be useful.. So before I get into identifying when your inner critic can be constructive, let’s start with acknowledging them.

This might feel silly at first, but by naming your inner critic you accept they are a part of you and it becomes much easier to tell them to zip it. Years ago, I attended a workshop by the author Rosie Garland on how to deal with your inner critic. This was where I first heard about baptising the voice in your head and it made total sense.

At first I debated naming them after one of my high school bullies but quickly realised I wouldn’t want them inside my head. I’ve mentioned that the inner critic can be useful too, and I would hate for a bully to have this power. On her website, Garland writes: “I call my internal censor Mavis, because it’s silly and helps diminish the yap-yap-yap. She is not a huge terrifying demon; she’s small and she’s squeaky. It’s much harder to take such a creature seriously.” And Julia Cameron, author of The Artist’s Way, calls her inner critic Nigel.

Go on, have a go. Don’t agonise too much over it. Pick a name and say hello to your little friend.

Douglas Adams’ once wrote the following motivational note to himself:

“Writing isn’t so bad when you get through the worry. Forget about the worry, just press on. Don’t be embarrassed about the bad bits. Don’t strain at them. Writing can be good. You attack it, don’t let it attack you. You can get pleasure out of it. You can certainly do very well for yourself with it!”

Try writing your own version. Pin it somewhere where you can see it when you’re writing. Make a duplicate to carry around with you for when you’re writing outside, in a café, library or any other place you enjoy going to. If your inner critic (who now has a name) is spluttering utter nonsense, take a deep breath and read that note to yourself out loud. It is now your mantra!

Need some more mantra-inspiration? Years ago, I attended a writing conference where author Denise Mina was one of the speakers. To a few hundred aspiring writers her advice was straightforward: “Just fucking do it.”

And in Writing Down the Bones, Natalie Goldberg says: “It is important to separate the creator and the editor or internal censor when you practice writing, so that the creator has free space to breathe, explore and express.”

Before you decide whether to listen to your inner critic, first establish if the voice is offering any constructive criticism. If they’re just smack-talking, you can tell them to shove off. (Swearing at them is totally allowed, but not compulsory.) However, if there’s a shred of truth there, they just might have something useful to add – maybe they’ve identified some inconsistencies in the plot, a clunky paragraph or a character that’s a bit flat – and so long as their commentary is constructive, hear them out. Of course, if they tell you the whole thing is a bloody disgrace, just ignore them and keep writing.

4. Ignore them completely when writing a first draft

In Bird by Bird, Anne Lamott says: “What I’ve learned to do when I sit down to work on my shitty first draft is to quiet the voices in my head.”

It’s nerve-racking enough just getting the words on paper (or pixels) in the first place, so the last thing you need is that whiny voice starting their nonsense. Your inner critic has no business being anywhere near your first draft so do your very best to ignore them until it’s done.

Lamott also says: “Perfectionism is the voice of the oppressor, the enemy of the people.” Remember that line when you’re writing your first draft – I recommend shouting it until your inner critic pipes down…

You might not be able to silence your inner critic completely but hopefully these tips will give you some guidance on how to deal with them effectively, experiment and discover what works for you. And remember, don’t ever let them (or anyone) stop you from writing. 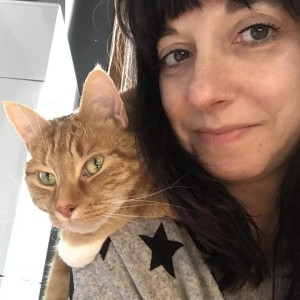 Veronique Kootstra is from the Netherlands but for over sixteen years has been living in Edinburgh. English is now the language she writes, and dreams, in. She writes short stories, flash fiction and is determined to finish her first novel in 2019 after a few (she lost count) false starts. She is slowly getting better at telling her inner critic to zip it even if she doesn’t always listen. Her work has appeared in The London Reader, 404 Ink literary magazine and the Scotsman as well as in online publications. When she’s not writing you can usually find her in the cinema or on Twitter @vkootstra.