Wait a second… Dealing with the main plot is a big enough pain in the arse, and now we have to worry about subplots, too?!

Uh huh, pull up your big-kid socks, it’s time to get plot weaving.

SO. The good news is, you’ve probably already devised a whole bunch of subplots without really realising it. Pretty much anything that isn’t exclusively concerned with the direct A-to-Z of your protag’s central mission counts as a subplot. All those additional little conflicts and secondary character journeys and breadcrumbs that turn out to be of vital importance later on = subplots. Excellent. We’re half way there already.

You’ve probably ALSO already introduced a bunch of these secondary story threads, but the further you venture into the novel-writing process you’ll need to give them a little more attention as they become more significant in helping or hindering the protag’s journey.

In our awesome 5-star Plotstormers course [#MARKETING] we introduce subplots like so:

Lovers, helpers, shits and giggles. No protag is an island; there’s gotta be other people in your story, too. Who are they? Are they helpful or do they add more conflict? Is there a romantic subplot in your story? A minor antagonist who compacts the situation even more? People with different outlooks/goals/motivations can breed excellent story conflict, and secondary characters can push the protagonist to achieve the emotional development that the story is really about. The people your protagonist meets along the way should interfere with the plot, either by helping or hindering. Maybe they complicate your protag’s decisions or help them to find their inner strength. Maybe their very presence creates brand new goals and motivations. [Note: If your character is flying solo, think about the people in their life who may have affected their decisions via backstory, flashbacks, long-held grudges or feeling dutiful to someone’s memory etc.]

An important point here: subplots tend to (but don’t always) involve other characters. That might mean following a secondary character’s individual story arc (in which they have their own goals, motivations and conflict going on), or it might be more about how the interaction between a secondary character and your protag causes a splintering of the main plot line (i.e.: the story encounters a new layer of complication). And while subplots may be complementary to the main plot, in most cases they tend to add complexity or confusion, up the stakes, and make things a little bit more difficult for the protagonist… Which is exactly what we want.

Generally, there are two main types of subplot:

#1.Parallel subplots = story arcs that run alongside the main plot but don’t necessarily cross over into the central story while still contributing towards the final climax/resolution.

#2.Hinged subplots = story arcs that are inextricably linked to the main plot, helping to explore specific aspects of the action while still moving the story towards the climax/resolution.

Note the verrrrry important similarity here: whatever your subplot is about, it should always somehow influence or affect the main plot and move things towards that final big showdown. Otherwise it’s just a tangent. And tangents are fluff, and fluff should be cut, always.

Obviously a subplot doesn’t have to do all those things at once. That would be… insane. But in general, most subplots can be divided into these three categories:

Maybe a subplot has nothing much to do with your protag but is important in showing how the society of your fictional world functions and therefore impacts on the rest of the plot in an indirect way.

Maybe a subplot is all about how a secondary character’s approach to the story’s conflict is in total contrast to the protagonist.

Maybe a subplot lingers in the background for most of the story like a big, looming, ominous penny about to drop, only to pay itself off at the end.

Maybe a subplot is ALL backstory – a gradual unwinding of a character’s past that comes to fruition at the final.

No matter how you go about it, your subplots should somehow eventually intertwine and either a) help to resolve the main action or b) find their own resolution in a slightly divergent (but still relevant) story arc. I mean, it almost sounds simple when you put it like that, right…? 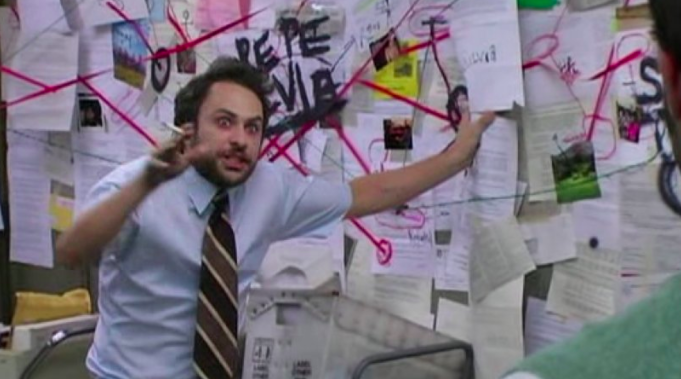 Okay, don’t panic. You don’t have to figure it all out RIGHT NOW. A lot of these subplot machinations naturally resolve themselves through the course of writing, or are far easier to unpick and tweak and reroute at later stages of the process. Some subplots may appear subconsciously and you don’t even notice them until you’ve finished your first draft. It’s all gravy. The trick is to take a step back, evaluate your story with a bird’s eye view, and get weavin’…

Want an example to help you get started? Okay. Let’s take good ‘ol reliable Harry Potter and the Philosopher’s Stone to see how each subplot contributes and is vital to the overall story (we picked out five major subplots here but there are a bunch more minor ones):

Main plot: Poor lil’ orphan Harry discovers he’s a wizard and heads off to a magical school in the hopes of escaping his terrible muggle family and finding his place in the world. Along the way he makes new friends, learns new skills, and oh yeah, defeats the evil nemesis intent on his destruction.

Subplot 1: Harry makes friends for the first time ever, Ron and Hermione (and Hagrid), whose individual talents and attributes help Harry achieve his goal both practically and emotionally (developing both plot and character).

Subplot 2: Harry develops a rivalry with upper-class arsehole Draco Malfoy. This animosity throws up all sorts of minor hurdles to overcome along the way (increased conflict) and also highlights the class divide in the wizarding community (worldbuilding).

Subplot 3: Harry and his friends discover that the legendary Philosopher’s Stone is hidden at Hogwarts, and that someone is trying to steal it – they decide to investigate (plot development, increased conflict), and eventually decide to take action to protect it before it’s too late.

Subplot 4: Harry discovers a talent for Quidditch (world building) which helps him find his place in this strange new world (character development, worldbuilding). His broomstick-flying ability also helps during the crisis/climax when he has to catch a winged key to open a locked door.

Subplot 5: Harry inherits an invisibility cloak and discovers the mirror of Erised which shows your heart’s desire. When he looks in the mirror he sees his parents which inspires him to find the truth about what happened to his family (character development). The trio also need the invisibility cloak to sneak out and stop the Philosopher’s Stone from being stolen at the end of the book (plot development).

There are obviously plenty more subplots we haven’t mentioned here (like Hagrid buying a black market dragon’s egg and inadvertently spilling secrets about how to get past the three-headed dog guarding the stone etc) – but you can see how each major subplot clearly affects the central plot (and also interconnects with other subplots) in a tonne of different subtle ways. Take any one of them out and the story just doesn’t work.

AND HERE’S THE CRUX OF THE MATTER: If a subplot doesn’t contribute to the plot as a whole (eg: a 5,000-word meander down backstory lane that’s all very interesting but doesn’t actually drive the action forward or develop character), and fails to fit into one of the above major subplot categories then, sweetie, it probably needs cutting…

ONE FINAL IMPORTANT CAVEAT (AND AN EXERCISE):

You might not know what all your subplots are doing right now. You might have a few that will eventually turn out to be unnecessary (but you won’t know that until later!). You might have some that are only just blossoming into being with no clear idea about where they’ll end up. You might accidentally create a subplot without even noticing. THIS IS FINE. No need to drive yourself nuts trying to nut it all out at once. It’s a process, okay?

HOWEVER, no matter what stage you’re at, it’s always worth keeping an eye out for potential subplotty-ness to help you start weaving and wending and layering up that conflict.

So take a moment, take your current draft and/or outline, and try to pick out as many subplots as you can find, looking in particular at how they factor into/influence your main story, eg:

Remember, a single subplot doesn’t need to do all these things, but so long as it ticks one of the boxes, it’s probably got legs.

Next, draw yourself a lil subplot diagram and think about how they might all coincide, interweave and connect with each other and your main plot. Are there any you could merge? Could one inspire another? Are any of them in direct conflict with one another? How might your subplots change/improve/strengthen/complicate your central storyline?

As always, don’t expect to find all the answers right now. Novel writing is a marathon, not a sprint, yada yada yada, but this exercise is really useful at any point in the process, and is one you can fall back on again and again when you’re finding yourself stuck. Who knows? A subplot might just hold the answer to EVERYTHING, dig you out of a writer’s block hole and send you storming towards the finish line…